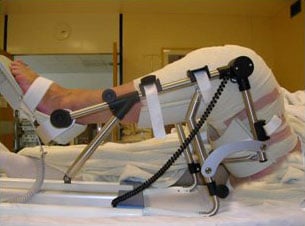 Today about 10 a.m. I had physical therapy “Holy ^#@>!”, When I stood up to walk, my knees felt like someone hit them with a baseball bat, then covered them with bees. That may seem a bit over-dramatic- but it is a pretty good description of how I felt at the time. (Keep in mind that I am Irish and we never let the truth get in the way of a good story). One curious thing kept happening through all of this physical therapy, I became extremely thirsty throughout my PT sessions. I mean “Lawrence of Arabia” parched (see what I mean about being Irish).

The physical therapist put at strap around my waist and held on to it while I walked. I really don’t know what would have happened if I fell- but physics would dictate that her 120lb body wouldn’t stand a chance against my 250lb+ hulky frame.  I took a step, holding myself as upright as I could in my new walker. Owwwwwwwwww! Then I took another, then another, then another. Surprising as it sounds, the movement actually felt a little less painful on my knees than just lying there in bed.  Pretty soon though I felt a little light-headed and thirsty- terribly thirsty. My physical therapist sat me down on the bed and told me “that was good for the first time” and that next time we would go for twice the distance. Ahhhh- laying down never felt so good.  I thought that was it for the day, until she yelled out to  me as she left, “I’ll see you at 2”. What? Physical therapy again at 2? Oh man!

One thing I found really made me feel better were the CPM machines. I had 2 of them because I had the bilateral version of knee replacements. By the way, every time someone saw that I had the double replacement they looked at me like I had drawn the short straw and said things like “WOW! 2 knees – you must be brave!”  and “Oh my gosh – did you know what you were getting yourself into when you decided on doing both knees at once?” I felt like saying “Duh, me not know what bilateral mean. I just thought maybe the other knee would get jealous”. Of course I knew what I was getting into; If I had done just the right knee – I would be back in 9 months doing the left. I figured one trip to the operating room would be best, especially with the added variables of diabetes and Rheumatoid Arthritis to contend with.  My doctors thought it was best to replace both knees and once and it made sense to me also. Plus who knows with the way health insurance is going now whether I would be able to get the surgery covered by my insurance plan in the future.

Oh yeah- going back to the CPMs. These are really cool contraptions that are kind of like riding a bike lying down. You strap your legs in and then a motor turns on and your leg is automatically bent and extended,  over and over. The physical therapist and doctors want me to be in these at least 6 hours every day. Heck I don’t mind – I even fell asleep while using them a couple of times.

The headline and subheader tells us what you're offering, and the form header closes the deal. Over here you can explain why your offer is so great it's worth filling out a form for.